Steeped in Tradition...  A Labor of Love

The Methodist Church of Almena was organized in the log school house at Almena Center in 1853. This school stood on the North East corner. There were five charter families, with Philip Teed being the leader. Soon after being organized, the church was placed with the Oshtemo circuit, which then consisted of Almena, Mattawan, Genesee Prairie, and the Hurd district. 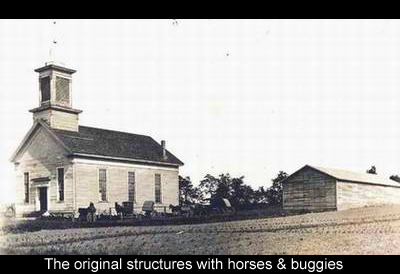 In 1856, a new school was built east of where the present Church now stands, and services were held there until 1864, when the school was destroyed by fire. The first basement that was placed under the sanctuary contained a dining hall and kitchen and was later improved through following years with the additions of central heating. The present Church land was then leased from the Bonfoey family. The church was built and dedicated in 1869. Among the first trustees appointed, we find the names of Hubbard Hill, Abel Burns, and P.M. Teed, whose son, A.J. Teed was prominent in our church one hundred years ago.

Other families in the church during the early part of the century, were the Waites, Brooks, the Tracy's and the C.H.Bolinger families. In 1908, the McKeown and Miller families moved into the community and are still identified with the church, as are many descendants of Abel Burns. Later the circuit was changed to three churches, Almena, N.W. Oshtemo, and Mattawan. The Minister living in the parsonage at Mattawan preached in Mattawan in the Morning, then drove horses and buggy to Almena for a 2:00 P.M. service, and then to N.W.Oshtemo, for evening services. About 1911, the Mattawan Church was disbanded, and the parsonage sold. The Almena Church then was placed with the Paw Paw charge. Out first Minister being A.T. Luthur.

In the late thirties, the Church was raised and a basement dug, which was a project of several years, with the work being done by members and friends. The basement has been improved greatly in the past years, with central heating, a well equipped dining and kitchen, with modern lighting and running water.

After nearly fifty years with Paw Paw, the Church became a charge by itself. It then was united with the Glendale Church and the Rev. james Grant was Pastor. He was a student at Garrett Institute. The George McKeown home at Wolf Lake was rented by the Churches for use as a Parsonage. Rev. Grant was Minister three years, and then replace by another Garrett student Minister, Rev. Robert Conn. At this time the Glendale charge was dropped and the N.W. Oshtemo Church was again united with ours. The parsonage remained at Wolf Lake. The Church stands much as it did 100 years ago. Some changes were the gift of a bell in 1910 from the McKeown family.

In 1958 and 1959, by order of the Fire Marshall, an addition was built on the South East corner of the Church with a new entrance to the Sanctuary and basement. Rooms were also added for indoor toilet facilities. In 1961, the old steeple had to be replaced by a new one. The work was carried out by the men of the Church. Inside the Church we find many improvements. An Arch was added in the front of the Sanctuary, with the making and material being donated by Wm. McKeown in Ill., and sent here for completion by his son's George and Edward. In 1947, an alter was made and donated by the late W.K. Miller, whose hobby was woodworking. 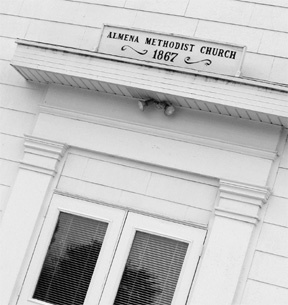 The Church has been completely redecorated with tiled floors and improved heating. An Organ fund was started by donations given by relatives in memory of Ilona Crofoot and L.B. Hoodmaker. Many names are found on records of today that were there in the early history of our Church, so this Church stands a monument to the integrity of our early pioneers, who built well on the rock of their faith. A new addition for a growing church was built forty years ago. South and behind the church another basement with dining room and kitchen facilities were added in the 1960s. It is now used for a Youth activity room. Also indoor bathrooms were built on the ground-floor level and east of the church that connected to the stairway leading to this new dining area and also to the church sanctuary. These additions served the church until the following west addition and today's Fellowship Hall was added. In time and in about 2006 the old bathrooms were taken out and a modern Pastor's office was built in this area. The old office in front of the church was redone and is now a sound room also holding office equipment one being the printer where bulletins are printed along with other church forms. In February 2008 a new sound system was installed for the sanctuary's use.

In 1988 a covered shelter was built behind the church for picnics and gatherings. It still stands today and is used for various outdoor activities. The West addition of the church was finished in 1992 costing approximately $200,000 and was a huge project for our congregation. We had several who donated monetary gifts toward this project and with church fundraisers it was paid off fairly quickly. Much of the labor was voluntary and it helped to deplete the cost. Jack Link donated money, time, expertise and items such as dishes for the kitchen, etc. It was his generosity and insight that helped the congregation to forge ahead and build this wonderful Fellowship facility with several Sunday school rooms underneath. By law an elevator was placed at a cost of nearly $2,000. Individual churchgoers were responsible for building this addition giving many man-hours of work and gifts. It also brought outsiders to its aid that helped with the project. Various inside doors have brass plates that show names of people who donated doors and they can be observed throughout the rooms. Jeff McCray built the display case that is in the Fellowship Hall and also built the tool shed behind the church for his Eagle Scout project.

Sprucing up the Sanctuary In 2004 David Field built scaffolding that took him high to the ceiling of the sanctuary. There he laboriously spent many days caulking all of the cracks between the narrow boards of the original ceiling. These cracks turned into miles of filling. After finishing this project he painted the entire ceiling. It has been a wonderful addition to the room. He continued to cover the pew seats with new crimson-colored material. A new carpet was also laid during this time with walls and wainscoting being painted making the area bright and clean looking. Other decorative projects have been completed. Two stained glass windows in memory of Maude and Carl Manning and one in the memory of Helen Gancer have been added to the foyer. A small garden area in front of the church contains a Peace Pole. Jennifer Nette helped to complete the garden area with planting of greenery.

The list of devoted people to Almena UMC goes on and on of those who have helped to make the church what is today. For instance, in 1865 Mr. Teed, a dedicated church attendee, found many subscribers had pulled out taking their pledges along with them. The group was at a standoff for deciding what denomination the church should be. He pledged and gave much of his own money to keep the project going. We are thankful he succeeded. During the lean years and the Great Depression several Congregationalists sought out ways to raise money for keeping the church doors open. It was not easy as they could barely feed their families.

More information about the church history can be found in the church foyer. Questions can be forwarded to office@almenaumc.com.